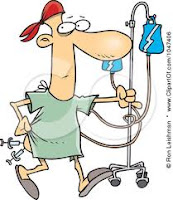 Another week gone by and a fresh new week has arrived. I prayed really hard that this week would be better than last week. I was extremely tired with all the brain-consuming cases. Everyday i prayed that i work just for HIM. Work is also part of ibadah.....as long as our niat (all our intentions) is for Allah....LILLAHI TA'ALA. So this week, Allah still wants me to learn therefore he gave me more of exciting, interesting cases...2 weeks of intensive chronic illness course...

1) This patient was a one week affair patient. He was also my early bird patient for that particular day, came in complaining of genital ulcers for 6 months and wanting to screen for HIV. He said he confidently think that he has HIV. So after asking him a few questions, he said that he once had sexual intercourse with a prostitute who subsequently died of HIV, that was back in 2006. I checked his genital ulcers and it look like either gonorrhea or syphilis. His skin looks like as if he was about to have Kaposi sarcoma. But i wasnt so sure so i showed the genital lesion to my colleague and my FMS. My FMS was shocked, she did not say he has HIV but asking me his AIDS status...looking at his condition, my FMS sure he was already in the AIDS stage. So I sent him for the rapid test, HIV Elisa, hepatitis B/C screening, renal profile, liver function test, CD3, CD4. In KK setting with too many patients, I had very little time to counsel him about HIV. It wasnt fair to do one test without a proper counseling. His case did not end that day. After the rapid test, he went back home forgetting to come back to see me with his result. I called the blood-taking procedure room for his status...YES, his rapid test was positive. So we called him, and he came back the next day (on Tuesday) for a short briefing abt his condition. I completely prepare all the necessary to refer him to our HIV clinic. But he really look pale on that day. The next day (on Wednesday), I received a call from the IK (inspector kesihatan) regarding my notification of this pt's HIV status..he said this pt was already been notified in 2006. But when pt came in to see me on Wednesday for his CD3/CD4 blood investigation, he denied and claimed was not told about his status, so the IK asked me to inform and re-notify his AIDS once proven with lab investigations. Thursday, he came to see me, confused about the HIV clinic which was supposed to be on Friday. Then on Friday, he came in the morning and i told him his appointment is due at 3pm....planning to refer him back to PD.

2) Pt with underlying diabetes and hypertension came in for uncontrolled sugar and plus lumps and bumps at her underlying subcutaneous tissue. Maybe neurofibroma...??? pt was meant to TCA in 1 weeks time to review her sugar but apparently did not show up to me (maybe she went and see other doctor?


moral of the day - as doctors, we are exposing ourselves to high risk disease like HIV, hepatitis, tuberculosis...sigh...

One patient referred from ED for repeat Potassium (kalium). She went to ED the day before complaining giddiness and noted to have hyperkalaemia (K+ 6.2) with no ECG changes. They wrote there "K+ 6.2 (lysed)", so patient was treated for "Giddiness secondary to electrolyte imbalance". No statement mentioning whether any correction was done nor any repeated blood potassium was done to confirm her potassium level.(to confirm the lysed sample). Pt was discharge and to come back at KK the next day to repeat her potassium level. Somebody at ED seem to be very confident about discharging someone with potassium of 6.2 without repeating it. If the repeated blood was a safe level of potassium, then it's ok to discharge and to repeat the next day, however, i assume they did not repeat it as it was not mentioned. patient can go into cardiac arrest if the potassium is too high. it must have been HO and that HO never discuss the case with her MO...sigh....so she came to me the next day with repeated potassium of 6.7. ECG no U-wave. Thank Allah as pt has no chest pain of sort. I called ED to refer the case as it was meant to be a red zone case. (need to call ED if it is red zone case or yellow zone cases that need special attention)..so I highlighted the fact that pt was "dangerously" discharged yesterday with potassium of 6.2....GERAM.....

moral of the day
1) dont trust your house officer....no no.. i was once a HO too... but we need to make sure  their training is adequate. Lately  we are hearing news about the increase numbers of HO but reducing quality of care from them as more numbers of HO would reduce their working hours and experiences hence reducing their responsibilities and so cultivating a negative, care less environment for HO to work.
2) if you are not sure, please ask.... it's OK to say "i dont know" and there is no "stupid questions" when it comes to saving life. (Lebih baik kena marah sbb bertanya dari kena marah sbb tak tanya....kesannya lebih besar kalau tak tanya --> this is what i practice during my HO time)
2) MO must supervise more, so meaning MO have extra responsibilities.

oww i sprained my neck 3 times (as per say in prev entry) yet i still come to work and yes, i saw interesting cases that day.

1) this pt came in the evening complaining of bilateral leg swelling for 2 weeks. She came a week ago, investigated by my colleague. ECG, renal profile and Urine FEME were done, at at glance, results were normal. So i planned to send her for a chest xray to see any heart enlargement. (3 importantg caused to rule out in a patient of bilateral leg swelling are HEART failure, RENAL failure, LIVER failure). Somehow, Allah wanted to show me something, so i took a second look at the investigation done the week before. I saw Potassium of 1.6...that was super LOW !!! (i had overlooked at it for the first time, in which i thought it was the creatinine that was 1.6 (creatinine of 1.6 is normal but potassium of 1.6 is super low - normal is 3.3 -5.1)....OH NO.....so instead of just a plain chest Xray, i sent her for repeat renal profile and another instinct told me to do one FBC (full blood count).....she was very cachexic, I asked her whether she had any significant weight loss and she said yes. so i wanted to do thyroid function test too. Anyway, she came back with a normal chest Xray but repeated renal profile showed potassium of 1.7 and FBC of pancytopenia (all blood parameters on the lower side - HB 6.0/ Hct 16/ TWC 2.1/ PLT 123. Vitals stable, afebrile, lungs were clear but her abdomen has ascites with some vague fullness over the lower abdomen query mass. So again, I called ED to refer the case for potassium fast correction and TRO malignancy (query gynaecological malignancy)....sigh... she really remind me of my late aunt who passed away from ovarian CA.

2) A neonate, day 5 of life came for neonatal jaundice. I saw the child has left preauricle skin tag. i wasnt sure with seremban's practice whether a child would be screened for any renal anomalies if they have skin tag/ pits over their ears. As i was unable to call the Paeds MO and my FMS was not too sure abt it also, so i had to discharge pt to come in the next day to repeat her TSB (total serum bilirubin). So that evening, I tried calling the MO again, and consult with her. MUST DO ULTRASOUND KUB, MUST REFER PAEDS.

moral of the day
1) must be very careful of what we are looking at
2) as doctors, we tend to LOOK at things WE KNOW. so can miss a lot of other things that we dont know
3) doctors still come to work when they are not well..sigh

MC today, sprained my neck badly that I was unable to move it at all....however, because i was meant to refer the neonate today, i had to call my colleague to "catch" this patient. i did not write the plan about the paeds referral and ultrasound because i wasnt sure at that time and i had to discharge the patient first. So any enquries, i asked them to call me. But nobody did.....hmmmmmmmmm.....

ALLAH'S PLANS ARE THE GREATEST. As i was worrying about whether my colleagues able to "catch" that particular neonate, apparently the neonate came back to me today..... i was happy.... so the truth was that the patient did not even turn up yesterday!!! Haha... ALLAH is GREAT.... so I safely referred the child to paeds and arrange an ultrasound for her. ALHAMDULILLAH

moral of the day - ALLAH IS GREAT. GREATEST PLANS ARE HIS


THE WEEK ENDS WITH EXTREME TIREDNESS BUT A HAPPY ENDING
Posted by Dalisha at 17:21

Email ThisBlogThis!Share to TwitterShare to FacebookShare to Pinterest
Labels: work