Courtesy from a blog

One small mistake I made this morning caused me heck lots of suffering this whole day. And that mistake I made was eating late breakfast. Yep, I have a terrible gastric history for the longest time of my life and my gastric is very sensitive with irregular food intake schedule. Whenever I feed my stomach late, seemingly my gastric has a very strict alarm that surely would punish me with horrific pains in the middle of my stomach.

Therefore, today I was really, really suffering with gastric pains since afternoon. I spent my entire afternoon by curling in fetal position in my bed and rubbing medical oil on my tummy several times to ease the pains. I could not eat much but I had to eat. I made fish(y) porridge for my lunch and my husband fed me with frog leg porridge for dinner. However, I barely ate my dinner because my stomach still hurt so badly tonight. My husband, who's been a real caring darling today, could not stand me looking so awful because of my gastric problem and he insisted on finding me a doctor right after our dinner. No matter what.

After dinner, we circled around our neighborhood to find a nearby clinic that opened as today is Hari Raya and most people in Malaysia take a day off. On our way to find our usual private clinics, we passed by the Klinik 1Malaysia, a public clinic that only charges RM 1 (equivalent to SG$ 0.41 or US$ 0.33 or Rp. 2,800) for the (low income) Malaysian patients regardless of their (light) diseases. I think by now there are about 50 available Klinik 1Malaysia already in operation nation-wide.

Although we learned that this Klinik 1Malaysia was open today (and amazingly it's empty too! Seems like people don't really fall sick on Hari Raya), my husband told me that this government-sponsored clinic would be our last resort tonight. 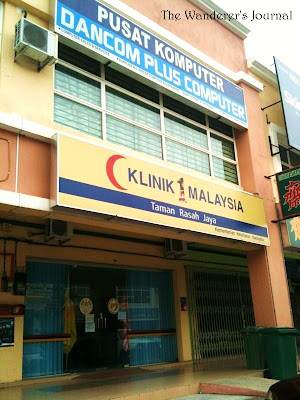 The Klinik 1Malaysia in my neighborhood.

Then we continued our journey to find the private clinics that we usually go but unfortunately, both regular clinics that we visit were closed today. So, as a result, somehow we were made to go to Klinik 1Malaysia tonight. 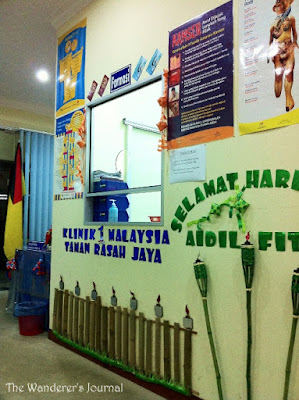 Inside the Clinic: Merrily decorated to celebrate today's Hari Raya.

My husband reckoned that since I am not a Malaysian, the RM 1 policy of Klinik 1Malaysia might not work its magic on me. But he was wrong. After the nurse (whom I think was so interested with me being an Indonesian in Seremban by joking and asking so many personal questions to us) filed my details in the registration card; we discovered that I was apparently also eligible for the RM 1 policy as a Malaysian's wife. However, she did ask us to show our marriage certificate but we, of course, don't carry this kind of certificate around for doctor visits in Malaysia. Thus, as usual, for registration we only showed her my passport in place of the Malaysian identity card, which I don't have one.

This RM 1 policy was very interesting to me. A mere RM 1 for the doctor's consultation fee and medicines. I was honestly still in awe (read: mouth wide opened) when my husband took that RM 1 note out of his wallet for advanced payment in the registration counter. 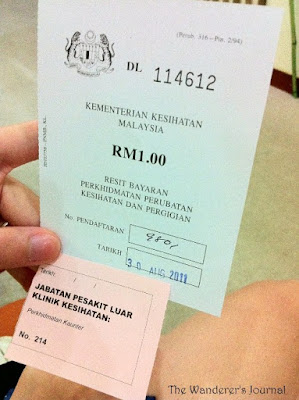 Further, my husband also mentioned that as compared to private clinics, usually public clinics in Malaysia would only release higher quality controlled medicines to their patients. I say, two birds with one stone and no wonder, this place is insanely full on normal days.


The doctor who examined my gastric problem tonight was quite good and very thorough. He carefully checked my health history by bombarding me with lots of questions. He even demanded my explanation of my late breakfast this morning as he knew that I am very aware that I cannot afford to eat late due to my gastric issues. I was speechless. Then he asked me again, "Why?", now with his dagger eyes directly looking into my eyes. I went, "Umm... Err... Umm... Err..." *scratching head and exposing a silly smile* In the end, my husband saved me from this doctor's burning question by saying that today we woke up late because of the public holiday and that's why we also had our breakfast pretty late.

After he checked my stomach and my health history, he gave me some prescribed gastric medicines. The best part was he gave me not just one but THREE of identical gastric medicines. A bottle of liquid gastric medicine for immediate consumption after I get home tonight and another extra bottle for stock at home plus a pack of (on-the-go) gastric tablets to keep in my handbag since he understands that I often get gastric attacks. How good was that!? I am so humbled and deeply moved by this kind and big-hearted treatment with only RM 1! 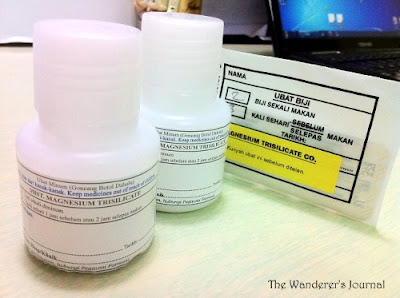 The generous stock of gastric medicines I received from the Klinik 1Malaysia's doctor today.

Oh Lord! I know now I sound like someone from a third world country (in fact, I am) who never enjoyed proper health services from my government before. But seriously, I am quite impressed with the health (clinic) facilities in Malaysia. In Malaysia, I usually have to pay about RM 20 - RM 30 in private clinics for doctor's consultation fee and medicines and this price is still cheaper by half from the medical fee charged by private doctors in Indonesia. Better still, this Klinik 1Malaysia's RM 1 fee is really awesomely bizarre to me! I think this is the cheapest medical expense that I my husband ever paid in my whole life.

My husband could not stop laughing at and teasing me since I was jumping with joy and became so crazily happy after being charged of RM 1 for doctor today. *wonder what I would feel when I get zero medical fee from the government one day*

By the way, my gastric problem is now already gone as I type this post.
Posted by Dalisha at 10:37